Back to the Learning Center

Particle Pollution and How It Affects Water

When it comes to the environment, the goal is to keep it clean not just for ourselves but also for future generations. A big thing that plays a role in the environment is the food and beverages we consume through particle pollution.

We are exposed to particles in the environment where we live. It is in the air we breathe, what we eat, and what we drink. So how does particle pollution affect the water we drink daily?

But what is considered a particle? They are either natural, like dirt, silt, dust, microorganisms, or anthropogenic, which humans make. Let’s take a closer look at particles!

Another large majority of particles come from plastic materials. During a timeline of 1950 to now, there have been more than 7,000 million tons or 8,300 million metric tons of new plastics manufactured.

What is included in the estimate? ALL plastics, but the primary resin are both low and high-density polyethylenes. As of 2015, not even 9% of plastics are recycled, and 12% are incinerated.

So where does the rest go? Seventy-nine percent are thrown away or landfilled EVERY year, and  the majority of the plastics are not biodegradable.

This illustration shows the global production for both the use and fate of plastic resins, fibers, and additives measured in tons. 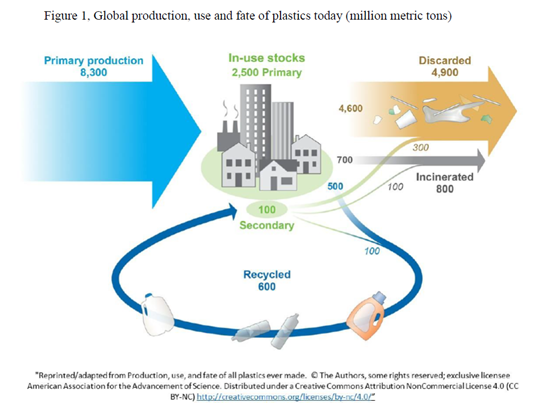 Globally, more than 300,000,000 tons of plastic are produced per year and thrown away when they are done being used.

One million bottles made of plastic are produced every minute in the world. If trends continue, the rate could increase by 20% by next year. The National Park Service forecasts that Americans alone use and throw away 500,000,000 plastic straws EVERY day!

Where does Plastic Go?

It does not matter where it originates; it could come from households or manufacturing facilities. Plastics are disposed of down the sink or toilet, landfilled, incinerated, or littered.

The plastics that end up in sewage sludge or landfill end up in our soil or water system like the local lakes and oceans. Nearly 20,000,000 tons of plastics are estimated to get in our oceans every year. The remaining amount will be in the soil.

The ‘Plastic Pollution Overview’ image shows an overview of plastic pollution reflecting an estimated 90,000 to 1,000,000 tons of plastic bits unintentionally added to soils during agricultural activities every year. 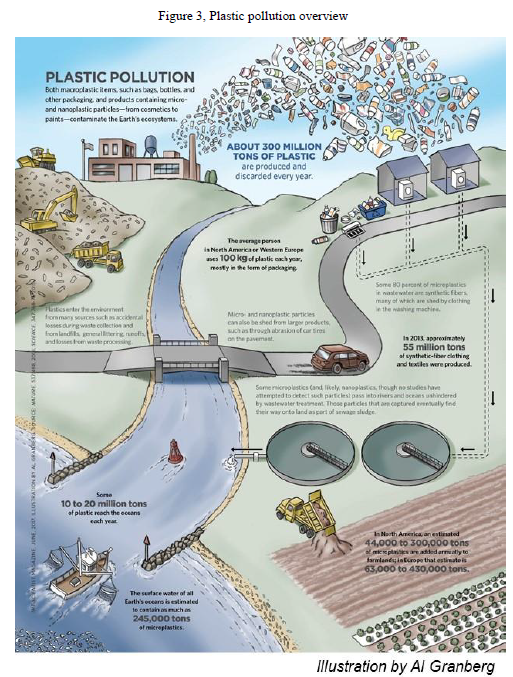 How Big are the Particle Sizes?

The majority of the plastics are broken down by ultraviolet radiation from the sun, and movement within the world’s oceans, even though plastics will not biodegrade. This chart shows the sizes of these types of particles:

The particles below at least .7μ are not factored in the estimate.

How Much Does it Make Up in Quantity?

Particles can either sink or float. A lot of the publicity has been to gyres. Gyres are masses of floating plastic in our oceans.

There have been five separate gyres identified. The largest one was to be an estimated size of Texas.

What is crazy is that floating particles only represent 1% of all the plastics in the oceans. Five percent of the total weight of plastics is located on the beaches. Sadly, 94% is either on the oceans’ floor or in the glaciers shown in Figure 4. 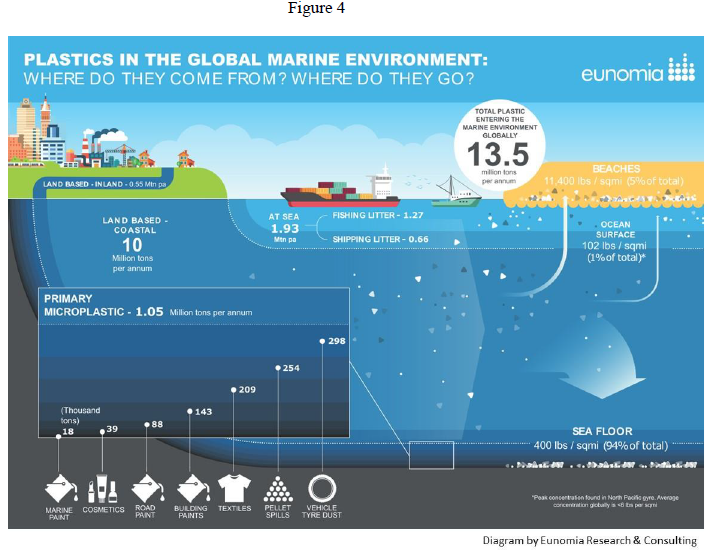 Another study reviewed 159 globally of the sampled waters, and 81% contained plastic fibers that were larger than 2.5 microns in length. If trends continue, by 2050, there will be more plastic than fish in the ocean by weight. A study shows all sea birds, and half the sea turtles have plastics in their bodies.

What Strategies can Mitigate Plastic Particles?

As the human race, we got the world in this mess, and it will not go away by itself. Below are some strategies that can help reduce and possibly mitigate plastic particles:

For municipal supplies, this rule’s regulation makes sure that the total concentration of the particles in the drinking water is less than .10 mg/L.

In the past few years, there have been several biodegradable plastic polymers developed. Most have been based on corn starch, but costs and unusual claims have limited the consumer base’s acceptance.

In Europe, biodegradable plastic bags for unused kitchen scraps are available. Plastic straws are rarely recycled and are mostly used once. There have been numerous ways to reuse straws. Advanced technology has even made edible straws out of seaweed.

We, as humans, must think of news ways of how we look at particle pollution. If our daily trends of using chemical products based on fossil fuels continue, we must know that they cannot decompose into the most basic chemical building blocks of carbon and water.

We must find ways to recycle more than our previous generations. The good news is that most thermoplastics can be recycled, along with the plastics in drinking bottles can be recycled.

There is a movement in Europe and some states in the United States that are banning single-use bags. Some areas are mandating that stores only use paper bags for the consumers.

Unfortunately, paper bags have just as high a carbon footprint that plastics. The good news is that paper bags are recyclable and can be used several times. Another solution is for consumers to bring their bags for them to use when shopping.

It will take time to reduce the vast quantity of plastics covering the earth. We can all start with efforts to recover and recycle plastics in landfills. Our primary focus needs to minimize disposable and other plastics that are discarded in the next few years.

The manufacturer must find innovative ways and take responsibility for the plastic particles used every day, but the initiative must be with us as the consumers.

How Exell Can Play A Role in Lessening Your Carbon Footprint?

Did you know our 3- and 5-gallon water bottles are reused about 50 times each? They go through a rigorous cleaning process each time empties are collected and returned to the distributor.

If single serve water bottles aren’t for you, then you can look into our 3- and 5-gallon bottled water delivery service, or even explore the multiple purification and filtration options we offer for your existing water line at your home or office.